This internal monologue used to be constant - it was almost easier when it was constant because it was kind of all that I was focusing on. Now, it's more intermittent. Everything will be fine and then all of a sudden I'll feel like somebody punched me in the stomach, yet I'll have to keep my composure because you can't just fall apart whenever you want to ... I'm struggling, but I'm also tired of the ups and downs. It's absolutely exhausting ... so this is my final rant. I'm putting it all out there and then I'm just going to move on. These thoughts have been haunting me and though the don't hit me as frequently, they still hit me as hard. 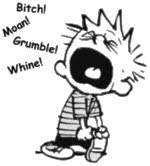 I can't believe this is happening to me.
I can't believe that the surgery wasn't a success.
I can't believe that they couldn't even take out the 6-cm fibroid that caused the alarm in the first place. They just closed me up? Just like that? What - and shrug their shoulders saying, 'Sorry, there's nothing we can do.' That's it?
Did I make a mistake? Did I rush into this surgery? Did I choose the wrong surgeon? I knew that having a hysterectomy was in my future after my surgery three years ago, so I don't think I made a mistake in my decision. Did the surgeons do all that they could, or were they just not prepared to go further? I don't think they did all they could.
So now I'm stuck here.
Stuck with a uterus that's the size of a 6-month pregnant woman's uterus.
Stuck with the haunting words of that doctor who said, 'You can't lose weight around your abdomen no matter what you do.'
I'm stuck with these fibroids that are not only still in my uterus, but will probably keep growing and keep multiplying.
I'm stuck with the fact that at this point, even if I did want children, I wouldn't be able to.
Worst of all, I'm stuck with the pain and discomfort.
Stuck. That's how I feel. I've heard all the encouraging words - They wouldn't have found out about the adhesions if you hadn't had the surgery (or so we're assuming). There may be another doctor somewhere in the world who can help you. Things will get better, just wait. Time heals all wounds. Blah blah blah - All I have to say is 'Shut the fuck up.' I don't care about those words. I don't care. I know that there are thousands of people who have it worse than me. I know that things happen for a reason. I know that there are some things in our lives that we just have no control over. I also know that medical miracles do happen. However, at this point in time, I don't care ... as you're sitting there, smiling, giving encouragement, urging me forward, all I can do is smile and nod and say I know ... but all I really want to do is punch you in the stomach and see if you can stand that pain on a daily basis.
This is my pain. My reality. My problem.
I have been positive. I think I have been a pillar of 'Keep your head up and keep moving forward.' I will continue to move forward and be as strong as I can because really, that's all that I can do. However, in the midst of all this, I have not taken the time to grieve over what happened, and I think that has really been affecting me. So today I'm taking the time to grieve - even if it's by myself and via this blog. I'm just letting it all out there for the first and last time.
I felt like before it was already a struggle to keep moving forward and staying motivated - having to have a pep talk on a daily basis to keep yourself going is exhausting ... and I had to do that before I had the surgery ... so now it's even tougher. Still, I'll keep going forward - of course I'll keep going forward ... I'm just hoping that letting these words out into the open will help take some of the weight off my shoulders (if not my abdomen - hahaha, see, I still have a sense of humor!).
End of rant.
Posted by PlumPetals at 8:35 PM

Thanks for stopping by and leaving a comment! I can use all the support I can get :)

Getting Ready to Spin!

Getting Over my Fear of Dogs

Me and Otto in Italy

Me and BJ Penn

Me and BJ Penn after training in Vegas

With the Gracie Brothers in Vegas

Going for an Armbar